Hello Friends! Today I have the honor of looking into the writings of Paul Briggs. Paul has a background working for a local newspaper and lives in Maryland. He’s written short plays, short stories and two middle-grade/YA novels, Locksmith’s Closet and Locksmith’s Journeys, a story about a boy who discovers a portal to the future, finds no one living there, and tries to find out what’s going to happen and how to prevent it.

Paul is currently working on a two-part series about climate change, Altered Seasons. The first part, Monsoonrise, will be out in 2018. He is currently running a Kindle Scout campaign for it. You can nominate it here. (I did and you should too!) 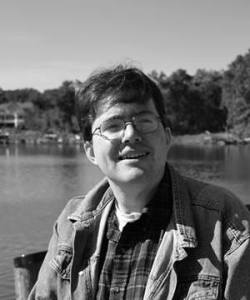 Let’s get to some questions:

1) What is your writing background?

Writing was always my strong point, and I wanted to make a living at it. I studied journalism at UMCP, then became a copy and layout editor. Now I’m doing some freelance ghostwriting for small businesses and training to be a court reporter assistant. (Those of you brave enough to major in journalism today… good luck, my friends. Good luck.)

2) What is your writing process? Is it a set process or more fluid?

It’s pretty fluid at first. I get an idea and start writing the first scenes that I think of. If it seems like I have a workable idea for a novel, that’s when I start planning it out.

3) What advice do you have for new/aspiring writers?

Here are a few tips:
• My father taught me that behind every art there is a craft. Behind the art of writing there is the craft of grammar, spelling and punctuation. Tiresome as it may be, hone your craft in these areas. Noticing a mistake throws your reader out of the story for a moment. It’s like hitting a pothole.
• Read your dialogue out loud. If it doesn’t sound like something that someone would say, change it. If it’s something you don’t want to change because it seems particularly true or witty or poetic… well, this is why people tell you to kill your darlings.
• Make sure every character is wrong or makes a mistake at least once. Especially if that character is supposed to be wise. Never confer infallibility on anyone.

4) What drew you to your genres?

I’ve always loved science fiction for the possibilities it offers—not just new and exotic settings, but new ways to explore the human condition by contrasting it with other conditions. Climate fiction, or cli-fi, not only has a lot of relevance right now but has one of the best features of science fiction—the centrality of problem-solving.

5) What project have you enjoyed working on the most?

The one I got the most sheer fun out of was a short play I wrote for the Chestertown Tea Party. It was called “The Voyage of the Geddes,” and it was about an 18th-century sailing ship crossing the Atlantic and absolutely everything going wrong.
But nothing has given me greater satisfaction than working on Altered Seasons. It started with speculation about the possible impact ice-free summers at the North Pole might have on the rest of the world. This turned into a story about the changing climate itself, which won an award despite being somewhat dry. A publisher recommended I expand it into a novel, and now it’s a two-part epic and its focus has moved from the climate itself to the human characters and their struggle to do the right thing for themselves and the world.

Thank you for the insight, Paul! I especially liked your point about starting off your writings by drafting the first scenes you can think of instead of writing the work’s first scene. I think your method helps the author build some momentum and internal excitement. Also, your advise for other authors was spot-on! I loved your point about making sure every character makes a mistake at least once. That definitely keeps them human and relatable to the audience!

For my readers, I hope you enjoyed reading this interview as much as I enjoyed conducting it! Please feel free to leave your thoughts in the comments below.

Ammar Habib is a bestselling and award winning author who was born in Lake Jackson, Texas in 1993. Ammar enjoys crafting stories that are not only entertaining, but will also stay with the reader for a long time. Ammar presently resides in his hometown with his family, all of whom are his biggest fans. He draws his inspiration from his family, imagination, and the world around him. Ammar is currently continuing to further his writing career. View all posts by AmmarHabib